James Chin, MD, MPH was the former Chief of the Surveillance, Forecasting, and Impact Assessment Unit for the Global Programme on AIDS (GPA) at the World Health Organization (WHO) between 1987 and 1992.  From hearsay, I understand that Dr. Chin quit WHO in protest over WHO’s consistent use and distribution of the highest computer estimates for global HIV/AIDS statistics.

Nevertheless, he did not leave quietly, and trumpeted his views in the booklet The Myth of a General AIDS Pandemic: How billions are wasted on unnecessary AIDS prevention programmes.  The title of this document is forthright, and it contains strong words inside as well:

“Since its inception in the mid-1990s, UNAIDS and its scientific advisors have been misleading the public and policy makers regarding the scope and trend of the AIDS pandemic.  In addition to these miscalculations, UNAIDS has exaggerated the potential or HIV epidemics in “general” populations.”

“Poverty is a socially and politically attractive hypothesis to account for high HIV prevalence, but available data support the opposite.”

“Easily preventable diseases are still killing millions of children each year, while billions of dollars are being squandered annually by AIDS programs to prevent HIV epidemics in populations who are not at risk.” 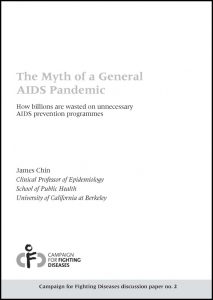 Again, as with Roger England’s assessments (see the blog item The Writing is on the Wall for UNAIDS), Dr. Chin utilizes the WHO’s own estimates in his criticisms.  Dr. Chin criticisms amount to a substantial conflict between modelers, but their arguments, assumptions, and interpretations remain essentially remain within the modeling domain.  For example, Dr. Chin adheres to the theory that African populations remain at risk:

[In September 2008, Dr. Chin stated:  “my major epidemiological differences with UNAIDS have been mostly resolved because now UNAIDS’ numbers and estimates of the pandemic’s trajectory are almost identical to mine” on a web site adjuvant to his trade book, The AIDS Pandemic: The Collision of Epidemiology With Political Correctness.]

HIV / AIDS The Facts And The Fiction

HIV / AIDS in South Africa: The Facts and The Fiction